Can you believe this profanity? I do try to keep this a pretty family friendly blog but this title is just too appropriate to not use it. The b!tc# in question is Juno. Remember her? 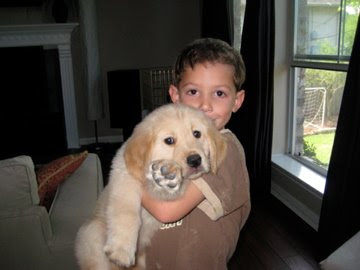 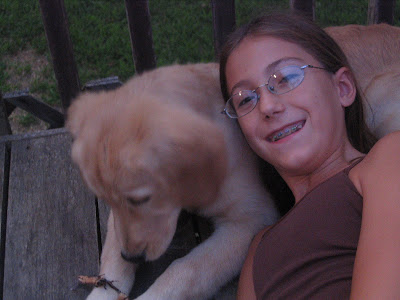 Perhaps this isn't the best photo to highlight her rapid growth but suffice it to say she has more than quadrupled her weight in the three months she's been with us and grown to be a strong, energetic puppy. And smart? Oh, the brains she has! I was awestruck with her ability to learn something new. Sit, Stay, Leave it, Come....all the basics were a breeze. Potty training took what I considered a reasonable amount of time. Certainly not longer than I had prepared myself for. I'd say we've been pretty good in that department since the beginning-ish of summer. We had even taught her to ring a small wind chime we had hung from the door pane with a suction cup when she wanted to go outside. We were all happy and things were good.

Until Port Aransas. While we were swimming and sliding, boogying and body surfing, this sweet angelic puppy was stewing in her organic Doggy condo, sucking down Pupcicles and plotting her revenge for her apparent abandonment.

It didn't take her long to put her diabolical plan into action. The night we returned home she watered the upstairs carpet THREE times, in less than an hour. As I escorted her outside, scolding her for her transgression, I could hear her smug thoughts - "That will teach YOU to go off and leave ME at a pet ranch. Pupcicles or no, THIS will NOT be tolerated.".

Silly me, I foolishly thought the worst was over when while seated at my desk two days ago I looked over, she looked me straight in the eye, squatted and EMPTIED HER BLADDER on my antique Persian rug. AAAGHHHH!! I know you're wondering why in the HEEELLL would I have a Persian run on the floor with a puppy in the house. I've asked myself that very question many many times. And it wasn't on the floor until just a few weeks ago. We had been accident-free for several weeks before I finally felt confident enough to unroll the rugs. And everything was fine. It really was. Until Operation Fiendish Recriminations started.

Phase Two of that undertaking began yesterday when Juno made a Doggy Doo ON THE STAIRS. What? Are you kidding me? On the stairs?!? What dog takes a dump on the STAIRS?? A vengeful dog that fully intends someone to step in it, that's what dog.

I hate to say that this kind of Doggy Terrorism is making me dread the day we have to put her back in the kennel. Or imagine what lengths we could go to in order to avoid it altogether. I don't want to be one of those people who lets the terrorists win, but maybe we can negotiate some kind of treaty beforehand.

Unfortunately, a very amusing read... Sorry to hear about the rug! :)

Here's hoping all your errant doggy poops are solid. Because you most certainly don't want to experience the alternative.