My little sister, worn down from chasing a one and two year old around, decided to leave today. BB and I waited 4 years before we mustered the courage to bring another child into the world who could potentially be as high maintenance as Big E. That girl has been a Drama Queen since a week before she was born. I used to say that Big E left me mentally drained and Little A left me physically drained, which left me....you got it....totally empty. Things have improved though and, for the most part, it's all pretty good most of the time. SO, I'd forgotten what it's like to have real toddlers in the house. Easy enough to pick up the breakables (like I've got many breakables left!), and to barricade the stairs, but I can't move the kitchen island or do away with the kitchen table or pad all the tile in the house; all of which proved to be a bit harder than a 15 month old's head.

But now they're gone and the house is strangely quiet. I say strangely because it's not actually quiet...Big E has been talking almost non-stop since we got home, Little A squeezes in what he can in between and they've been running around like their typical selves. Tree monkeys on meth are what come to mind. But, it's still missing that sound that only little ones can bring to a house. No baby-lust here, so don't jump to any conclusions. Just the appreciation of the sounds of Toddlerhood and the relative peace my sister can look forward to in about 4 years. I'm sure it won't come a day too soon for her.

Before they left we were able to make it to Wild Connections Butterfly farm. I had been a couple of months ago with Little A's preschool class but I have to say the private tour is the way to go. We kicked off our shoes and scampered about in the beautifully clear, cold creek that ran through and saw lots of butterflies and other living things including the tiniest baby toad I'd ever seen. About half the size of my pinky fingernail and cute! We got up close and personal with a couple of turtles and there was also a dead snake on the trail and I actually felt sorry for it. 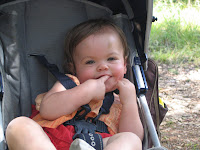 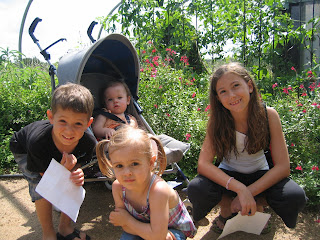 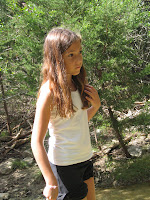 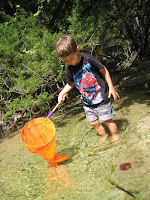 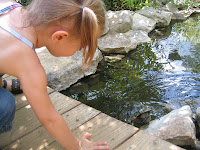