Zoos, Rummikub and back again

I'm officially 9 for 9! On niece's birthdays, that is. Present and capturing the moments up close and in candid color as each one of them entered this world and present when each one of them has celebrated every birthday since. There are more than 350 miles separating me and their birthday cupcakes but I have never wavered in the face of the hordes of tyrannical trucks swarming along I-35. Well, maybe I've wavered a little bit but I looked that near-paralyzing fear of eighteen-wheelers straight on and plowed forward anyway.

Something about my parent's house makes me very sleepy. Maybe it's the way that when the kids wake up my parents make them breakfast and take care of all their needs. I wish I could say I accomplished this or that, ran five or six miles in the beautiful weather they were having, or just....something. Wish I could. What I CAN say is that I slept until almost 11am one morning and almost 10am the next. Sleeping past 7:30am is just the height of decadence in my world lately and I wallowed in it like a fat sow.

In addition to sleeping, we made it to two zoos, ate a ton of food, saw a movie (Race to Witch Mountain....kids loved it but seriously. It stunk) and played Rummikub relentlessly. Relentlessly translates into all evening, past midnight, two nights in a row. Surely this contributed to the late sleeping. Rummikub is incredibly addictive and plays very well to my weaknesses of not being able to let go of something. Especially if I'm losing. I lost count of how many rounds we played but I didn't lose count of my win / loss stats. That would be 0 for ?. No wins. Nada. Pulled a Detroit Lions. I'll be looking for redemption when we meet again so prepare yourselves for some wicked melds.

In typical Spring Break fashion the kids gorged themselves on the Disney channel and marathon sessions of Hannah Montana, I Carly, and a few other shows with rich twins living on a cruise ship or hotel or some other hospitality industry. Symptoms of SBOS were rearing their ugly heads so the Disney / Grandparent Spoilage Detox began in earnest today and the withdrawals were epic.

I tried to distract myself from that maelstrom by attempting my first ever homemade marshmallows. You know, kids driving you crazy? Whip up a tasty treat that is easily and cheaply found at your nearest supermarket! I think they'll turn out fine, but after spending a good 20 minutes scraping rapidly hardening sugar syrup out from every nook, cranny, drip pan, underneath the drip pan and off the actual burner, it may be a while before we enjoy these gooey goodies again. Or maybe I just won't go off and start folding laundry while the pot of sugar is set on high. That would probably help. Can't wait to toss one in my coffee tomorrow morning though. No more 11am wake-up calls for me. Not for a while anyway.

It is with great shame I acknowledge that it has been two weeks since the Bubble has been graced with a post. No excuses this time. Just busy. Unmotivated to sit down and concentrate on any one thing for more than 2 minutes at a stretch. After much consideration as to why this might be I'm pointing the finger at Facebook. It's sucking the life out of me and reducing my already abridged attention span to an even further gross abbreviation of itself. The sweet voyeuristic appeal sucks me in. The soothing instant gratification keeps me coming back for yet another fix.

I am yanking the Facebook needle out for the moment and refusing to access Facebook for the rest of this day. Unless someone comments on my status. Or on a status I've commented on. Otherwise, no cheating. Or very little, at least.

Spring break starts in about five minutes and it couldn't have come at a better time. The last seven days have been busy ones. A week ago I spent the evening busily scooping popcorn for 50 kids and watching the original Escape to Witch Mountain at the school library fundraiser. The highlight of the evening was when the projector zonked out halfway through the movie, leaving my co-coordinator and me hyperventilating over how we could possibly entertain 50 kids for 45 minutes. It wasn't long before BB used his magic to get it back up and running.

Next morning we were up at the crack so Big E's Girl Scout troop could join 150 other volunteers in planting 240 trees at our neighborhood park. Four of those trees belong to Troop X now and I am looking forward to watching them grow. Tree planting always brings to mind The Giving Tree, one of my favorite books of all time and one that I still struggle to get through without a tear. 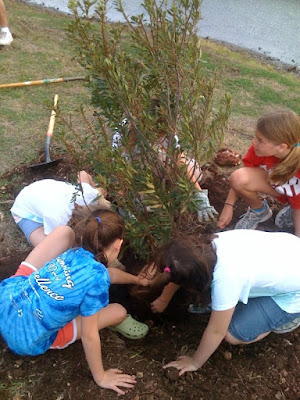 Otherwise the week was full with soccer, swim, book club, Salty Dogs, tapas, coffee at midnight, long overdue lunches with friends, and resuming tri-training. Today was Science Day at school and BB wowed the kids with a ball hitting robot he built. They seemed thoroughly impressed when the robot arm swung out and hit the ball and now regard him as a true hero. Nevermind that I'm the one who is there on a weekly basis getting down and dirty in the glitter. It just doesn't hold the same Impressment Factor.

Other BIG news of the week: real, honest-to-goodness RAIN. I woke to the tinkling of raindrops pinging on the bathroom fan two mornings ago and distant memories of precipitation washed over me. I saw genuine mud yesterday for the first time in what seems like years. It was beautiful. We were so desperate for moisture that I can't even complain about what it does to my hair or that we have paths of muddy pawprints all through the house. Or the fact that we went from 92 not that many days ago to less than half that these last few days. Our last winter blast before the unrelenting heat of summer bears down upon us.

But now, spring break. Oklahoma. Camping. Not much of a break, more of a Change of Scenery. Which is always good.