WTF? Are you a blogger or what? You think just because it's end of school and you're "busy" you can just stop blogging and not even give an "I'll be back in a week or two" message? How selfish and lazy is that? You have responsibilities! We know what you've really been doing....you've been watching "LOST" haven't you?....am I right?

HA! I KNEW it! You are so busted. First, you trashed the show as "condescending" and "bizarre". You said it was Lord of the Flies meets Stephen King, and not in a good way. And NOW. Now you can't stop watching it and you check the mailbox two hours before the postman (oops! I mean letter carrier) normally comes for the next disc. You're so, so pitifully weak.

You should be ashamed.

The rare opportunity to step into some high heels, put on a dress and bring out the bling presented itself last weekend when we attended the Bar Mitzvah of a friend's son. Being the Bar Mitzvah virgins that we are we weren't quite sure what to expect and were hoping it would be gentle. Turns out it was quite a jolly time and I only cried a few times.

The first time was during the slideshow. In every photo I saw Little A's face and him growing up way too fast. Thirteen seems like it should be far, far away. Another lifetime almost. But I've known JZ since he was barely older than Little A is now. And there he was. A laughing baby, then a messy toddler, moving on to a little boy, kid. A young man.

Composure regained, the creamy chocolate dessert with raspberry glaze and coffee makes dancing to Twist and Shout among all the adolescents seem less painful and awkward. This girl just doesn't dance at 3 o'clock in the afternoon with nothing stronger than herb tea in her system.

Then came the candle lighting ceremony. JZ's big sister made a throat-achingly lovely speech to her little brother and again, the tears rolled. To see this 16 year old girl so unashamedly profess her love, affection, and joy brought by her little brother (along with the annoying this or thats, of course...it's not all rainbows and unicorns all the time) was wonderful.

And then. The piéce de résistance was JZ's speeches. 13 poems. Cute, thirteen-year-old rhymes, each dedicated to someone special in his life. His sister, aunts, uncles, grandparents, soccer team, classmates. Parents. I was barely holding myself together at this point and then I think I actually blubbered. An ugly, chest-cracking, snotty-nosed sob.

Everybody needs a Bar Mitzvah. 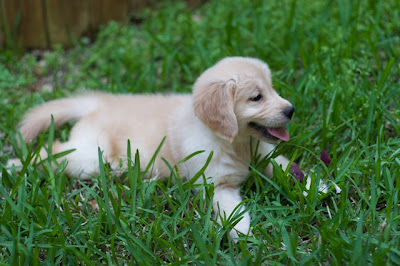 Hi! I'm Juno. The Bubbles brought me into their little suburban world on Friday. It's hard to believe they didn't already have a dog since Dogs are #53 on the list. 'Juno' is #57 on the list so really, I'm a double whammy. The Bubbles are many, many things on the list. It's kinda scary.

Yeah...they think I'm pretty darn cute. The way I run (tumble, actually) my fluffy, chubby body through the yard is quite irresistible. Who am I to convince them otherwise?

Big E made her way into Camp Halfblood today by attending the release party for The Battle of the Labyrinth at Bookpeople with the real, live, in-the-flesh-and-blood author, Rick Riordan. She had BEYOND a fabulous time and hasn't stopped talking about it and I'm truly afraid that she will pass out from lack of oxygen. 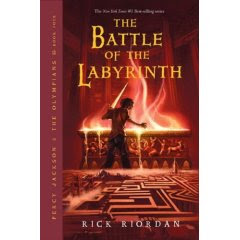 And the absolute BEST part of the whole thing?

She went with a friend.

Meaning I didn't have to venture into throngs of school-age kids and their parents all hell bent and determined to get THEIR book signed NEXT. Flashes of Johnson Space Center and the horror that surrounded that trip into the multitudes flew before me and before the hyperventilating turned into a full-blown panic attack my friend said she would be happy to take Big E with her two kids if I would take her shift of t-shirt selling at school. Nevermind that I had been at the school for 7 hours already...one more hour of selling t-shirts was cake (Cake! I tell you!) compared to submitting myself to that kind of torture.

In other news, Little A is officially registered for kindergarten. It's happening! They're really going to take him! I'm thrilled, excited, giddy, anxious and sad all at once. How can that boy be heading off to kindergarten? At the Kindergarten Round-up (the cute name they give to make filling out your name, address and emergency contact information 250 times seem less horrible) the kids that walked in with their parents looked so young. So little. So big-eyed and scared. Is it possible that Little A looks that young to others?

His last day at his nature preschool is Thursday. What we're supposed to do with him for a month before his sister and friends are released from their sentences, I mean classes, I have no idea. I guess he'll get to play with his new puppy. He'll have to fight me for her though.

The Semi-Annual Ribbon & Pony, Fairies & Unicorns, Mani/Pedi, Facial/Massage, Giggle-a-Thon, All-The-Junk-Food-You-Can-Cram-In-Your-Piehole-And-Chase-With A-Fizzy-Vodka-Drink Weekend is behind me now. Bubble Boy was gracious enough to grant me early exit on Friday so TRACEY JACKSON and myself raced out of Austin like the city was burning.

As we were the first two people to check in we hurriedly got down to the serious business of lazing around and wallowing in a phenomenon rarely experienced by us and those like us....It's been aptly named 'Nothing To Do' and was derived by Wordsmiths to indicate as succinctly as possible that no one is asking for a snack. No one is asking you to please help them with their homework. Nobody is spilling juice on the floor. There is no one asking What's for dinner? No laundry to fold. No floor to vacuum, no garden to weed, no one to shuttle to practice, no email to send or answer, no insurance people to wrangle, blah, blah, blah. It means quite literally, NOTHING TO DO. Read also as Do Whatever YOU Want. Seriously! Drink a beer at 1 pm. Sit on a lawn chair in the glorious sun by the sparkling clear Blanco River and don't move for 2 hours except to get another beer. Eat lovely, homemade meals prepared and cleaned up by SOMEONE ELSE. That's right! No dishes for two whole days! Spend nigh on 48 hours with 9 fabulous women who are also experiencing this unfamiliar episode of Doing Nothing. I highly recommend this State of Being. One should seek it out whenever possible.

Of course, while one is busy Doing Nothing, they should be prepared to handle the occasional misfit who decides it would be heelarious! to short-sheet everyone's bed. And consider carefully the consequences of strewing Cheetos and graham crackers about in the beds of their sleeping comrades lest a "Blood Feud" erupt. However, these are only minor glitches and some might even say they contribute in their own way to the overall pleasure of the Do Nothing Weekend.

Because, really? Two whole days of no responsibilities and great friends? That truly is a Great Escape.