Made a new friend while setting out the recycle bins yesterday when I came within an inch of stepping on the neatly coiled thing. The thing waited patiently under the recycle box I hastily threw on top of it while Bubble Boy and kids ran out so we could all gawk and frantically snap pics. Big E shot some video but since the poor snake was paralyzed with fear the video looks pretty much exactly like the photo. 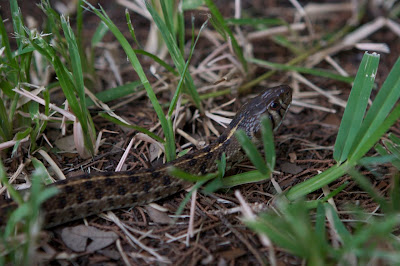 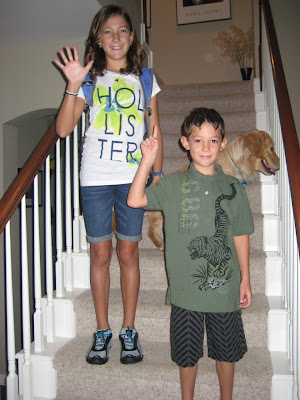 Little A did NOT wear his hair in this horned style. Although he wanted to.
After a summer of friends, sleeping in, popsicles, lazy days, nights of swimming, fun adventures hither and yon, with only a smattering of "I'm bored" and sibling squabbling rising to the surface here and there, we aired up the bicycle tires (why did I bother showering?) and rode off into the not-quite-cool morning to face the throngs of people descending upon the school for the first day of school. I didn't think to take a picture of the crowd trying to wedge itself through the hallway yesterday but here's a snap of today's crowd which I estimate at less than half of yesterday. 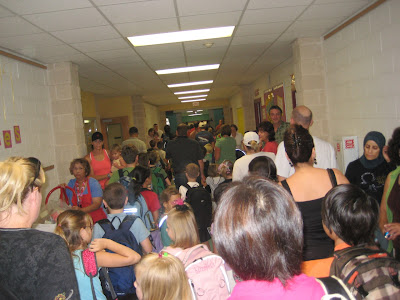 Big E was giddy with anticipation to get started with her fabulous teacher and class. Friends scattered throughout her classroom and the knowledge of all the privileges 5th grade holds has kept her buzzing for the last week. A bit of melancholy when she realized Monday was to be her last "First" day at the school she's attended since kindergarten. How that seems like it could have easily been last year I can't explain. Time playing evil tricks.

Little A was less giddy about moving on up to 1st grade. Moving from the cuddly comforts of his sweet kindergarten to the institutional portable building located 1/4 mile from the rest of the school, with its wood paneling and *gasp* his own desk, complete with a coloring sheet when he arrived. Not sure what to think about such an official looking classroom, he innocently reminded me, "I've never done this before". Sweet boy. Luckily, Ms. Teacher HAS done it many times before and I trust that he is in good hands. 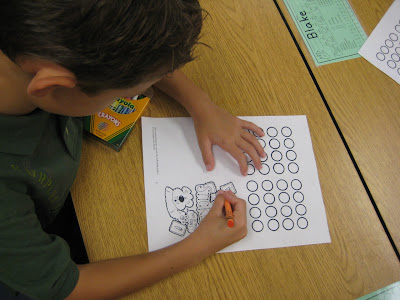 End of First Day reports were mixed. Big E had "the best first day EVER" and enthusiastically continued similar remarks for the rest of the day. Little A was concerned about the strictness 1st grade seemed to entail and was troubled that one little girl had her name moved up to red on the very first day. That seemed a bad omen. He did not have his name moved up the naughty chart and for that he was hugely relieved but still felt very tentative today. 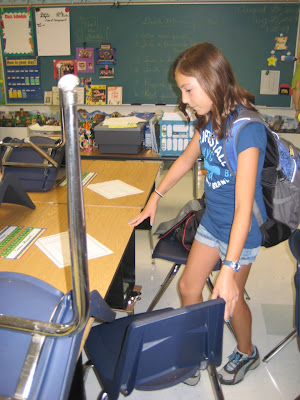 This was taken today so it's technically not a First Day pic. She warned me to not embarrass her in the class but I couldn't resist sneaking at least one. Absolutely no hugs or kisses though.
In other beginnings....LOOKEE! LOOKEE! A blog post! Took a little vacation there for a few weeks. Can't wait to get caught up on what we've been doing.