"Share the Road", "Be kind to cyclists", "Thank you for not killing me with your car". I'm accustomed to seeing these and similar bumper stickers around Austin along with articles in the local paper proclaiming the rights of cyclists. On occasion I AM one of those cyclists, daring to ride the open road side-by-side with my motor vehicle friends. I just love the jokers among them who think it's funny as hell to blast their horn just about the time they overtake you. Oh, yeah. That is so HILARIOUS (insert snarky sarcastic laugh here).

Austin is a cycling town. Whether we have Lance Armstrong to thank for that, our lovely weather, our eclectic, earth-loving population, or a city that is relatively willing to build bike lanes into a fair number of public roads I do not know. But I do know this. One need not travel far in Austin to see someone on a bike. Even a thong-wearing cyclist is a common sight 'round town. (Side note to say I spied him again last week wearing a hot pink thong and towing a little trailer behind his bike...he looked so incredibly happy. And tan.)

But here's my question. When is it too much? Too dangerous? Not just for the cyclist but for other traffic. Three reasons why I ask...

1) As I was making a trip into the netherworld of north Austin yesterday I was driving north on a major thoroughfare traversing a wide expanse of greenbelt area on a long bridge. This bridge has no bike lanes. And yet. There in the right lane of the bridge is a cyclist, pedaling his enlarged heart out, professional-looking jersey unzipped and flapping in the 102 degree heat. Not hovering near the shoulder, but right out there in the middle of the lane. Moving along at a pretty good cycling clip of about 25 mph, I'd guess. But the rest of traffic is moving at 65. Therefore, people are having to slam on their brakes, swerve into other lanes, etc...to avoid hitting this guy.

2) Article in today's paper. Quick story. Cyclist hit from behind, driver flees the scene. Guess who has the serious injuries?

3) Upon leaving downtown Austin today at rush hour, on arguably one of the busiest, narrowest downtown streets (west 6th street for you Austinites), a man on a bicycle, in the far left lane (it's a one way street), just pedaling along like he doesn't have a care in the world and he doesn't even have a helmet on his melon head. Once again, cars slamming on brakes, moving haphazardly into other lanes. He's pedaling along, whistling a happy little tune in his head.

SO, I hate to be a hater, but really. There has to be a limit. I understand they have the right to travel how they see fit. I understand they even have the right to put their own lives in serious jeopardy if they choose. I absolutely do want to be a cycling advocate. I hope I don't make any enemies of my cycling buddies with this post. But these two scenarios put dozens of people at risk, just during the brief time I was in their vicinity. Cyclists need to exercise good judgment and be good sharers too. Sometimes that might mean taking the road less traveled.

Bring on the water 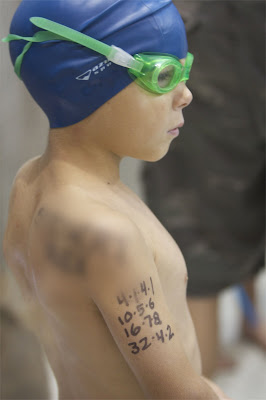 The gods smiled upon us and we were fortunate enough to be able to escape the sweltering heat by retreating indoors for the final swim meet of the season. As seasons go, this one seemed relatively short, not too unbearable, and actually kinda fun. 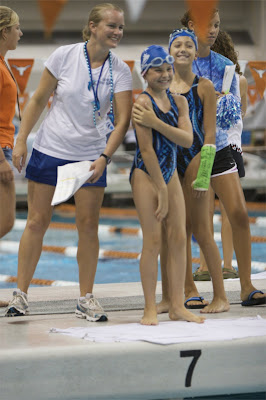 Smiling with Coach and EC. How 'bout that green cast? Note for Big E in the future...don't break arm the day before school lets out for summer vacation. 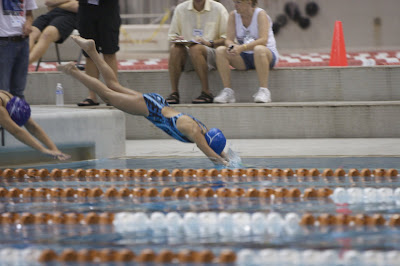 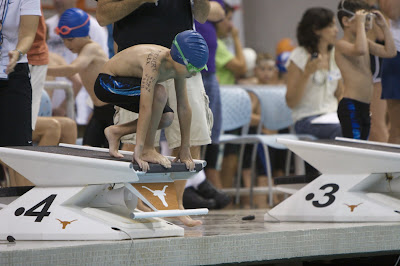 Despite the humid mornings spent waiting during practice, way earlier than should be expected of a mortal trying to enjoy summer vacation, I cannot deny swim team is a fun time, even for me. 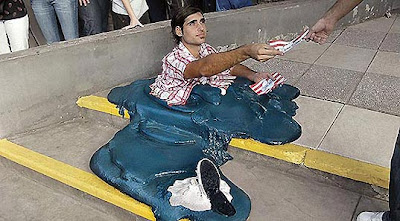 Bet you didn't know we're all made out of teal crayons.

Bubble Boy is giving me a weekend furlough for good behavior.... 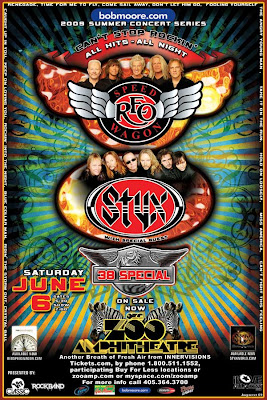 Off to a great start 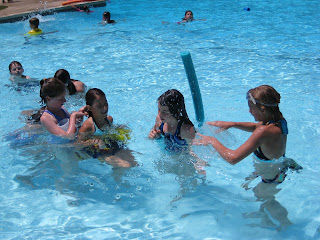 Day 1 of Summer Vacation was undeniably a huge success. SJ had the great idea for herself, CCC and me to rent the pool and invite a few friends for a private Summer Vacation Kick-off party. What a great way to throw a party! Listen up, potential parents-to-be, plan your pregnancies for a SUMMER birthday. Rent the nearest pool. Order pizzas. You can even go crazy with a box of popsicles. Bada Bing, Bada Boom, YOU'RE DONE! Pizzas, watermelon, bags and bags of potato chips and Doritos, brownies and cookies. Nearly six hours at the pool. Rock Band, painting fingernails with polka dots and stripes, a little bit of Ding, Dong, Ditch, trampolining and giggling with favorite neighbors, prank-calling a certain boy, some Brady Bunch and then a sleepover. If that doesn't get the summer started off right, I don't know what does. 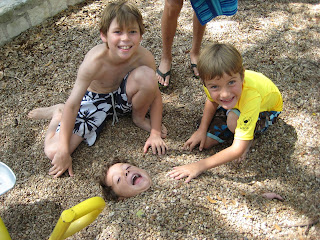 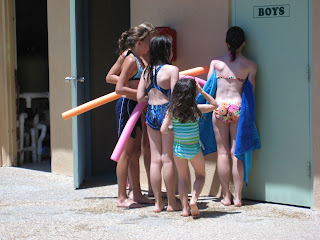 You see that right. Five girls huddled around the Boys bathroom. Hmmm.

What a day, what a day! The day started for the grown-ups when the doggie had some tummy troubles at 4:30am. Good morning! Doggie diarrhea, anyone? Anyone? CCC has warned me about these types of hazards and I've had a dog before, but there's just nothing like sitting in your bedroom at 4:30am, with a bucket of Oxy-clean scrubbing dog$#it out of the carpet to really make you search your soul for the tiniest scrap of doggie love. Fortunately for her, she has wormed herself into my heart and I did not banish her into the rain. But let the record show I will not make any promises about the future. She's officially on Notice.

Bubble boy got the little ones off for their last day of fun and excitement at school, where everyday is a party (at least for the last three weeks) and we embarked on one last Date Day. Date Day included a trip to the lumber yard to scout out potential tropical hardwoods for what will soon be a deck in our backyard and lunch at The Cheesecake Factory. Spicy chipotle pasta, you're my newest friend! Date Day then had to be cut short so I could serve cake to 130+ hyperexcited, graduating 5th graders and their tear-streaked parents. Then Big E and I boogied out of school before the teachers could put on their annual Chicken-Dance-Around-the-Flagpole groove in the 90+ heat. She fell on the school stairs yesterday and did some damage to her wrist and elbow. X-rays ruled out a fracture but there was mention of a possible 'buckle'. Follow-up on Monday.

So, now I guess I'm back in the blogging business. My brain capacity had reached maximum levels and there just wasn't enough bandwidth to get a coherent recollection of the day out of me at night. I expect to be freeing up some of my cerebral hard drive in the coming days. I can feel the space opening up already. We'll get caught up. And it will be like I was never gone.

The end is nigh 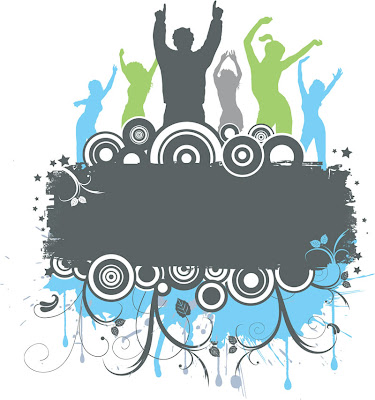 School's out today and while I see sibling squabbling and the inevitable cries of Excruciating Boredom in our future, I also see T-I-M-E. Sweet, luscious, free time, to be precise. And oh, will we wallow in it. Like gluttonous pigs.