A weekend in June

This particular weekend began at the wholly unholy hour of 4 am yesterday morning. 4:30 AM was the time required to wake in order to have everyone properly washed and brushed, fed and clothed, packed and prepared for the final swim meet of the season. It is at these times I wonder What The Hell Are We Thinking? in supporting a sport that requires this kind of schedule. It borders on masochistic. 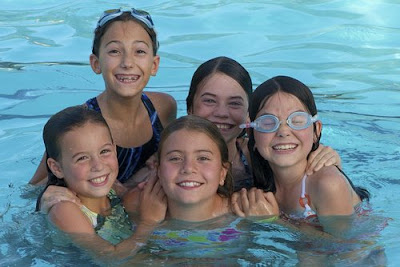 The kids enjoyed it, which is what really matters, right? Please tell me that's right. They both swam their events and had a great time swimming in a state-of-the-art natatorium. Natatorium. When I hear this word it seems like it would be a building where ancient Roman sexual rites of passage took place and were designed to make these rites a spectator sport for the ruling class to wager on. Am I making that up?? 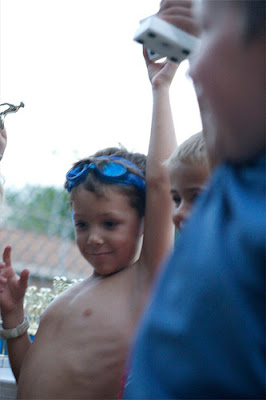 But I digress. After the meet we were home for a nap, which left me feeling drugged and groggy for a few hours. Then the awards ceremony which included fajitas, with chicken that looked "succulent", that I couldn't eat (dinner pre-purchased, pre-cleanse). And which lasted for 2.5 hours, which was entirely too long but I still managed to get three whole pages done in my scrapbook before I fell asleep somewhere between brushing my teeth and actually getting into bed. Those three pages put me halfway through 2007. Of course, I haven't gotten to the San Francisco/Yosemite trip which is a book in itself.

TODAY we saw WALL-E. Oh. What a great movie. It was so sweet, endearing, cute, charming, etc...I just watched it with a perpetual "Awwww....what a sweet baby chick!" face. What a fabulous job they did in making a robot so expressive. And the music was perfect...not overwhelming but played perfectly in line with the emotions of the moment. Kids loved it. Bubble Boy loved it (or at least liked it a whole lot). It had a great message. Namely, don't buy so much JUNK. Just because the Big Gulp is cheaper per ounce than the smaller size you don't NEED the Big Gulp. Don't make so much TRASH. Don't forget to talk to and connect with real, live human beings...not via cell phone or email. But in REAL LIFE. How novel. 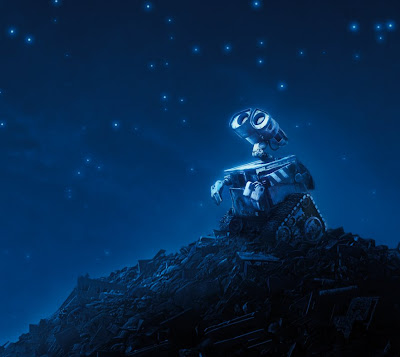 "I don't want to survive! I want to live!"
Then tonight...IT RAINED! Not just a little spit here or there, but actual rain falling from actual rain clouds. It only lasted a few minutes but it was enough to get things nice and wet and leave that Just Rained Smell. Juno was in nose heaven with a whole treasure trove of smells that the poor girl hasn't smelled since her very earliest days. And the water dripping from the roof provided lots of entertainment (for both of us) as she jumped around trying to catch all the drops in her mouth. And it's not a Gazillion degrees outside. It feels pleasant in a Fresh and Clean kinda way. Not oppressive, thick and sticky. And I don't have to get up early tomorrow.