Here's what we did Sunday morning.

Big E and Bubble Boy (aptly named Team Gryffindor) teamed up to work their magic on central Austin via bicycle. JC and I partnered up and joined Team Toprope, The Asthamatics, Angry Asian Chicks, Pretty in Pink, and Team I Like Pie as we rode the streets of Austin, completed fun obstacles like riding itty bitty bicycles, towing kegs in Townlake, bike jousting, innertube battling, and limboing on bikes. 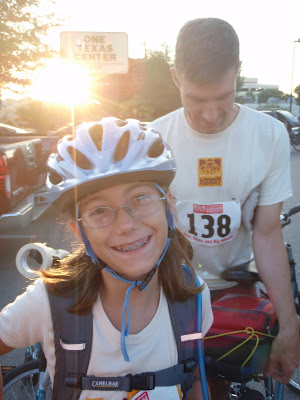 This year's ride was the largest ever with over 1300 cyclists and it seemed like we saw every single one of them waiting in line at Ozone to pick up bottlecaps with oven mitts and at Pease park anticipating how they could possible walk with two kegs attached to their feet or do a wheelbarrow on a bicycle wheel. We made the tough decision to skip those checkpoints, which meant we didn't cross the finish line with all twelve beads. The father/daughter teams waited it out but ended up missing two other checkpoints due to time. 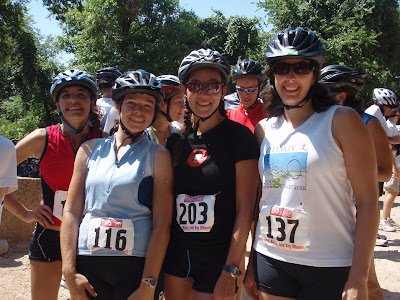 So, while I can say I really enjoyed mapping out our route, riding it (it WAS a pretty sweet route with wide, tree-lined streets through some of the cutest parts of town and included bike paths I previously didn't know existed), and doing the fun obstacles, I left feeling a sense of disappointment and let down that the lines at the finish were endless, sponsors were running out of their freebies (and I WANT those freebies!) and the line to even pick up your ticket for the raffle of Awesomely Cool Bike-Related Things, was so long that no one in our group was willing to put their life on hold long enough to stand in it, not even for a beautiful Timbuk2 messenger bag. 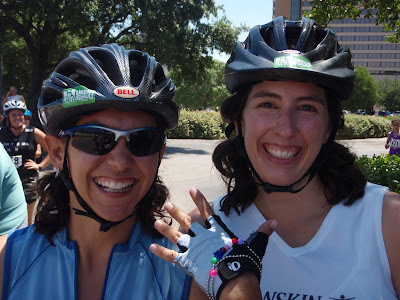 I wish Big E's first experience had been more thrilling, but really...if she hadn't heard us moaning about the let down, she probably would've thought it was the greatest thing ever. It took me 35 years to ride my bike 18 miles and now she's done it before turning 10. Not bad. She got an education in potty language...something I'm sure she'll look back on with exalted fondness. She was also quite proud to have had more up close and personal interaction with kegs than most of the kids in her class. She definitely got out of her little bubble this weekend.