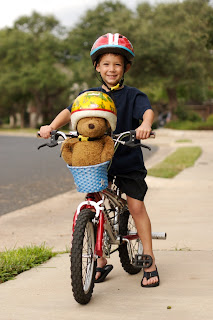 Little A received the ultimate honor of being Child of the Week at his little preschool, which translates into him being the Special Kid who gets to ring the 5 minutes bell (5 minutes to lunch, 5 minutes 'til playtime, 5 minutes 'til playtime is over, 5 minutes 'til hike time, and so on...which translates into a lot of bell ringing in my opinion), and also the caretaker of Squirt the Bear. First off, he hated that name, so a change of moniker was required. 'Cookie' seemed much more palatable and made the boy happy, so in his little section of the scrapbook Squirt is aka Cookie. I hope that doesn't throw off the other kids. 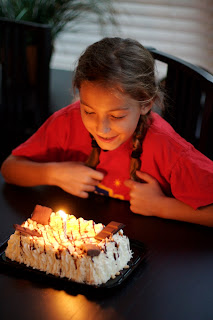 brownies, helped escort Big E to school via scooter, played games and really got into Webkinz. Maybe he recognized some long lost loves?? Little A was sad to have to return Cookie to his class today but relieved in the knowledge that he will again be Child of the Week in 7 short weeks.

This weekend marked Big E's 9th birthday. Nine years old! I'm not sure how it has happened that I am a parent of a nine year old who has braces and an iPod nicer than mine. It makes me happy that she still wants me to walk her to class, even if she does start walking 5 steps ahead of me once we get to within 20 feet.

This itty bitty, store-bought cake was the result of me feeling puny for the last 6 days. Isn't it a law that when the helpful dad leaves town then something has to fall apart? Last time Bubble Boy left town it was on Little A's 4th birthday and his car was broken into. He flew on his merry way to Seattle while the kids and I wrangled a friend (a VERY GOOD friend) into driving a car with no window or dash and broken glass all over the seat and floor, home in the November cold. This trip I came down with a funky cold thing the day he left and have been fighting it ever since. Therefore, no energy to make a cake and we ended up with this beauty from Whole Foods. You can see that I didn't even manage to put it on a nice plate. Martha Stewart is cringing and excommunicating me from The Club.

Big E handled the first year of no birthday party with grace and style. Since Little A is turning 5 and has yet to have a birthday party that included more than close family and I can handle only one party a season, the nod had to go to The Boy. Big E has since focused all party-planning energy on HIS party and I have a feeling I'll actually have to do very little other than show up. Sometimes it's really great to have a Type A kid. 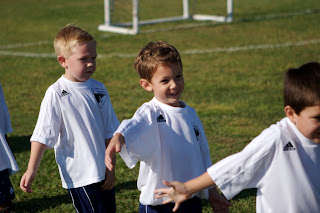 We also spent the weekend shuttling the kids to their respective sports. Little A had a helluva soccer game. He was ON FIRE. I got some video, so if I get ambitious I'll try to put up a minute or so. The other team was the first team this season to actually give them a challenge and you could tell during the first quarter that they all were like "Huh?? Are those GOALS they're scoring? On us? Nuh, uh...don't think so!". So they turned on the magic and though the other team rallied a couple of times, The Dragons put those Pterodactyls DOWN. Which only makes sense, according to Little A, because Dragons can Fly and have FIRE...Pterodactyls can only fly. They really should've thought of that when they were choosing their team name. 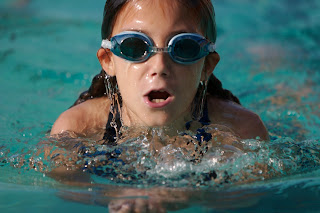 Big E went to swim practice to break in her new swimsuit before we had a lovely, humongous lunch at Curra's, then bike shopping. This was our third time out looking for a new 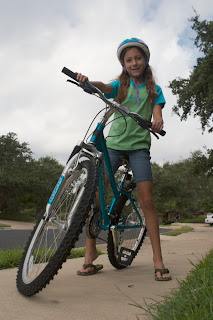 bike for Big E who outgrew her current bike about 18 months ago. We went a few places and I was starting to slide downhill rapidly when we walked into Buck's Bikes, I blurted out what we needed, he pulled it out and we paid for it. Easiest sale he's had in years, I'm sure. But we did end up with a lovely bike. She agonized over the color...metallic turquoise? Berry? Purple?? God! How to choose??? Honestly, this was like trying to choose between double fudge chocolate chip cookies and triple chocolate brownies.

Sunday we caught up on relaxing, reading, a little yard work, and even our two TV shows, The Office and The Daily Show. If you haven't seen the Jon Stewart interview with Lynne Cheney, take a few minutes. It illustrates how history can be and is skewed to meet political ends. Like we didn't already know that.

Thanks for the John Stewart clip.