Watching this movie must be exactly what it's like to be a 'vegetarian' vampire. It counts as sustenance, but it's never fully satisfying. Oh, it's definitely a movie alright. It's a way to spend two hours that doesn't totally suck, and if you're with friends, it'll even count as time well spent because it was fun. But if you're looking for a quality cinematic experience my suggestion is you switch your ticket out for Bolt. Not that I've seen that, but surely, it's GOT to be better.

Now for the introspective portion of the review. As I've pondered the movie today, I've wondered WHY do I continue to ponder this movie that suffered greatly from struggling to find an overall "feel" and never could get the timing quite right? I'm sticking with my assertion that these actors CAN actually act and blaming inept directing / editing. There is a little part of me that continues to look for excuses to see the movie again. Maybe I could take Big E. Or I could sneak in another secret, anonymous 9:30 showing. Any other friends who'd want some company? Seriously. It wasn't a good movie. And still there's a nugget of me that thinks I should see it again. Maybe I just missed the "thing" that would make it great.

The books are the same way. They're not great writing. Great story, yes. Competent story-telling even. But the writing? Eh. Very simplistic. As subtle as being hit in the head with a can of corn. And yet. Could I stop reading them? No. Did I continue to contemplate beautiful, sensitive Edward, Bella and their forbidden love? Yes. Yes, I did. And why? Why would I not just move on and put it behind me like most everything else I read? It's like Stephanie Meyer put some kind of Mormon curse on me.

I want to read those books after they've been rewritten by a great writer (and including the previously deleted scenes...you know what I'm talking about). I want to see that movie after it's been redirected and edited and a new stylist has fixed the Edward Scissorhands-esque crazy mess that was the Cullen family's overly abundant hair and absurd make-up. 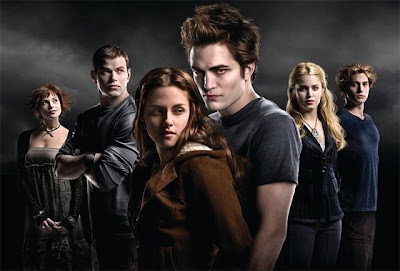 This shot isn't truly representative, but was Jasper meant as a joke? He's the one in the back, on the right. I thought so, since we laughed every time he appeared on the screen but then I realized that no one else was laughing. This happened several times and it started to become awkward.

I do hope they make the rest of the books into movies. And I hope they step it up a notch. We deserve better.

I kept wanting to read "Twilight". Even though I knew it was, well, bad. Just not quality. Still, I'd pick up the book in the bookstore and almost buy it. Almost. It's kinda like how I sometimes wanna buy a holiday sweater. I KNOW it's wrong but still...on some (sick, twisted) level? I want one.

I wouldn't tell just anybody that.