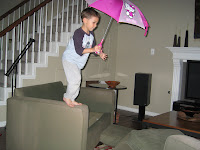 Little A has declared that he plans to be an animal rescuer "Just like Diego!" when he grows up. For those of you not up to date on your Nickelodeon (will there be a day when I'm not?), "Go, Diego, Go!" is an animated program about a little boy who travels to a variety of exotic locations with his sidekick, Little Jaguar, and rescues an animal in trouble. He has a very exciting life for an 8 year old but I do wonder how his mother feels about his best friend being a baby jaguar.
Anyway, I tend to think that Little A's line of work will more

likely fall under the title of "crazy stunt man" or "dangerous adventure seeker". I guess that's not too far off from animal rescuer. Diego does hang out with big cats. These pics don't do full justice to all his antics, but let me just say that he has perfected his form in throwing himself down the stairs with the greatest That Looks Real and Very Dangerous effect you can imagine. Today he conquered a giant leap between the two sofas in the living room WHILE holding an umbrella. The umbrella was a very important prop (wouldn't the fact that it's a Hello Kitty umbrella just make the compound fracture seem so much more adorable?) and reminded me of the horrible movie, Lara Croft Tomb Raider: Cradle of Life
and the scene where Lara and her kinda love/sidekick Terry Sheridan (Gerard Butler) fly through the air onto a barge in their flying squirrel suits. Or maybe he could grow up to be a James Bond who does his own stunts. The Name's A, Little A. Oh, I'd be so proud.