The brilliance of David Sedaris is not his sardonic wit as many people may have you believe. True, at first reading, it IS his biting humor and sense of irony that jumps out, grabs you and won't let you go. He is one of the few authors that will illicit an out loud laugh (not a snicker...a REAL laugh), whether I'm listening to him read his work through my little white earphones as I push my oversized cart through Costco or as I read into the wee hours unable to put down one of his books as I try to muffle the laugh so as not to wake BB. Oh, he's definitely funny. A riotous hoot.

But what I love about him is more than just his rollicking hilarity. It is his ability to take the mundane, the ordinary, the colorless and make it exceptional and memorable. How he uses just strings of words to so precisely convey the flavor of any given situation and elevate it to an almost tactile experience. Sometimes those situations are funny. Sometimes they're profound. He has a knack for hiding a scoop of profound underneath the funny with an occasional topping of sweet melancholy.

He didn't remember his boozy friend, which wasn't overly surprising, I guess. The only thing there would have been to remember is a ridiculously ridiculous woman who couldn't stop giggling. I did manage a sentence or two this time that I believe was semi-coherent if you listened carefully. My heart was racing and pounding so hard I couldn't hear my voice over the thumping. And I shook Sarah Bird's hand. This was nothing compared to TRACEY JACKSON, who scored a hug and subsequent email exchanges. SHE does not let a pounding heart, sweating armpits and an uncontrollable case of nervous giggles verging on full-blown panic ruin her opportunities to speak to famous people like some people. 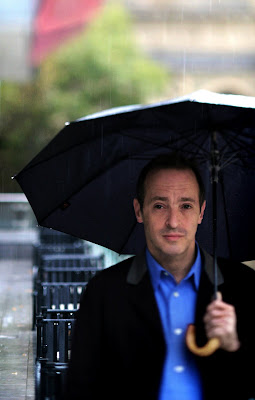 David's (may I call him David?) popularity continues to grow and I'm happy for him. I really am. But it was strange to have the book signing table set up beneath a 15 foot tall cross made out of crayons. Apparently, his genius has outgrown the Paramount and he was booked at Riverbend, a big-box, mega-church. Perhaps this was for the sake of irony. Yeah, I'm going to go with that.

This growth phenomenon is a result of another reason why he's one of my favorite authors. He reaches me. A thirty-something, liberal, stay-at-home mom. Not a fiction writer creating a character from the ether with whom I can identify. But making me identify with him. Seeing my own feelings and reactions or observations through his words. And it's not just me. Based on who I saw in the audience, he reaches young people, old people, in-the-middle people. Men, women, gay, not gay. Maybe even a few conservatives?

A little research has turned up that he will be in San Antonio in June...not doing a lecture series this time but an appearance at a Hastings. San Antonio isn't that far....anybody up for a road trip?