Today I drove two crazy girls and three stunned boys to see this: 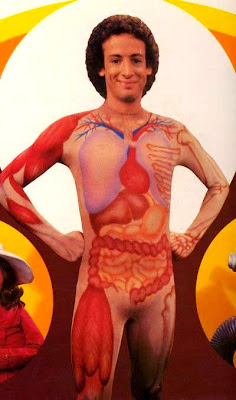 Well, actually it was the modern version of Mr. Slim Goodbody, so the hair wasn't quite as puffy and the background colors weren't quite as earth-tone circa 1977. The New Slim utilizes a handy PowerPoint with 3d graphics and some catchy tunes to impart just how terrific our bodies are. There was a lot of giving ourselves a hand, patting ourselves on the back and shaking our own hands. If nothing else, Slim taught us to be our own best friend.

One recurring thought during the presentation was my hope that Slim is making a good living dancing around in his unitard for 4th graders. As someone who is terrified to speak in front of people under the best of circumstances the thought of standing in front of a group in a ridiculous (and not even anatomically complete) unitard singing goofy songs and dancing goofy dances is almost enough to bring me to a complete shut-down.

But the real news of the day is that Big E and her friend were maniacs in the car. I believe this to be brought on by the fact that there were three boys joining us in the mom-mobile so those girls cranked up the crazy like nobody's bidness! The boys sat in virtual silence in the back row, eyes wide and mouths agape as these girls basically laid down some pretty unforgettable memories on just what the future held for these poor boys. And they weren't encouraged.

That whole adolescent boy-girl thing is so cute! I bet the girls had a blast.

Dude! That guy is just SCARY.

When I was a kid, I thought Richard Simmons was Slim Goodbody's secret identity.